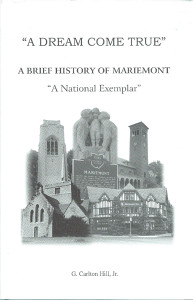 The Village of Mariemont, incorporated in 1941, has a rich history dating back to its first citizens, the prehistoric Late Fort Ancient  Indians who occupied the area between 1400-1670.  Early pioneers  arrived here from Pennsylvania, Connecticut and New Jersey in 1788.  As the new 20th century ushered in an interest in America of the English Garden City suburb movement, Mary M. Emery realized her dream of planning a new town where the quality of family life became the highest priority.  This book reviews the earlier history of the Village and updates the events of the last third of the 20th century in Mariemont. G. Carlton Hill, Jr. (published by the Mariemont Preservation Foundation, 2000)